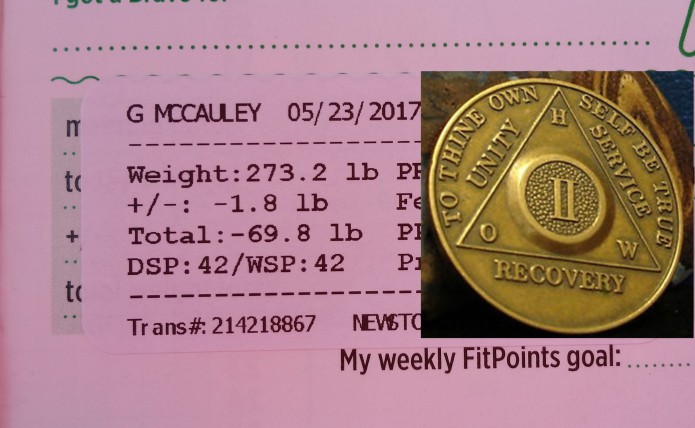 So, Today I sit here with a new determination to get my ass back on the road I need to be on. The past 2 weeks have been an overwhelming struggle for me, and I have yet again, allowed myself to succumb to my less than stellar eating habits. For the better portion of the last 14 months, I have been able to walk the straight and narrow on my WW journey…(for those of you who don’t know, WW is Weight Watchers.) It’s the AA of fatness, which I guess in all rights, is actually OA (Overeaters Annonymous). Hu! I needed to toss in a reference to AA to tie in to the latter part of this gripe, so bear with me. Anywho, yada yada, where was I? Oh yeah, the past 14 months…I’ve been able to lose a significant amount of weight, and I must admit, it was fairly easy. Once your in the deepest part of your misery hole, there is only one way out, and that’s up. Between my health problems and my mental state, it was either eat myself into having to purchase a Jazzy or try to get my life and head into some kind of control. Seeing since I don’t have the money for a personal mobility device, I thought I’d start with the other option. You are what you eat. I was a big sloppy mess of sugary goo, and that’s exactly what I felt like. Coupled with my ever undulating Thyroid issues, I was a fucking light bulb ready to blow out.

This brings me to my loving husband, and the above AA reference. Let me preface this to say that my dear hubby, John, IS one of the greatest men in the world. He is kind, loving to a fault, generous, and very attentive…well, as attentive as a guy can be. I mean come on, sometimes they can really kinda fuck that up, eh? But for the sake of this writing, he is a wonderful man…98% of the time. (LOL. Love you my baby.)

It is no secret, far and wide, from anyone who knows us, that he is an alcoholic, and has been since the ripe old age of about 15. He actually started drinking much younger than that, but I have given him the benefit of the doubt for those first 2 years, sort of like a trial, but after that, all bets are off. I have known him since I was 9 years old, which puts him right in that first 2 years of practicing his blight. By that time, I was also very well immersed in my lifelong addiction with food, which was obvious from looking at me. Fast forward a few years, and here we sit. Him the alcoholic and me the foodaholic. We both recently celebrated some milestones in our respected programs. He celebrated his 2nd full year in AA, and I celebrated an 80 lb. loss on the scale.

I have been to quite a few of his meetings, but he never to mine. He said that attending with him would maybe give me some tips that I could use that would help me in my own personal situation. I must agree that good advice is good advice, and can be turned around to be of use in many addictive situations. He loves the program. It works for him, which means it works for us, and we have a happy marriage. Yay, us….

The problem is that for some reason, he doesn’t get it when it comes to my predicament. HE DOESN’T GET IT! He sees the struggles I go through on a daily basis. He knows that I’m trying to learn new habits, and get a handle on making better choices. He knows I have a set amount of points in a day, and for the week, and I have to stay on point. I cannot let my guard down. I have to be just as vigil as he does when he passes a grocery store or a corner bar, or a beer cooler. I have told him repeatedly, YOU as an alcoholic CANNOT drink PERIOD to stay sober, but me as a foodaholic? I can’t STOP EATING! My only option is to learn to control my addiction. Most of the time, I am able to do this, but he doesn’t make it easy. I know he doesn’t do it on purpose, or to sabotage me. He says it’s because he’s trying to be nice. Loving. Caring. I don’t see it that way. I need him to be mean. I need him to sit there and eat that fucking pizza like he’s surrounded by a table full of convicts, all the while encircling the pie with his head bowed and arm protectively around it. Instead, I get comments like,

“Wanna go out to eat? I’m thinking Buffet tonight.”, or

“I can’t eat anymore, here eat the rest of this.”

OMG! It is these times that I want to stab that guy I love so dearly in the fucking neck with a mammoth tusk! I want to scream at the top of my lungs,

“Let’s go out and get shit faced and have a good time.”, or

But, I don’t shout. I have, though, taken to asking him these exact questions. Mostly he peers at me as if I’m kidding. I am not. I try to explain to him that he is not helping me by being kind and loving. He is teasing me, and he needs to stop. I have always been a drinker. More so in my younger years, but when he decided to go back to AA, I quit, too. His drink of choice was always beer, so I no longer drink any beer for fear that I would feel guilty for teasing him. If I do partake, it is a glass of wine, which doesn’t even rate on his radar as a suitable adult beverage. Usually, if I do have a glass, I am either out in public or he is at work. This is my choice, and it works for me. I don’t ask him to not eat around me, that would be a ridiculous expectation. He can eat whatever he wants, just please don’t put it in my face. Don’t try to be nice to me. Just eat your food.

Now, if you know John, then you know that the ONLY thing that he likes to eat is pizza! THAT’S it! It’s a joyous occasion when I can get him to stick anything else in that pie-hole of his, and an even better day when it’s a vegetable! He thinks nothing of asking me to pick him up a pizza “on my way home”, never thinking of the agony I must endure on the ride, smelling the melted cheese and garlic butter, both drenching the thick crust with perfectly cooked pepperoni’s with their middles hot and oily, and their edges slightly curled up and crispy just the way I….OMG! Just STOP!

Somebody know where I can find a fucking mammoth tusk? 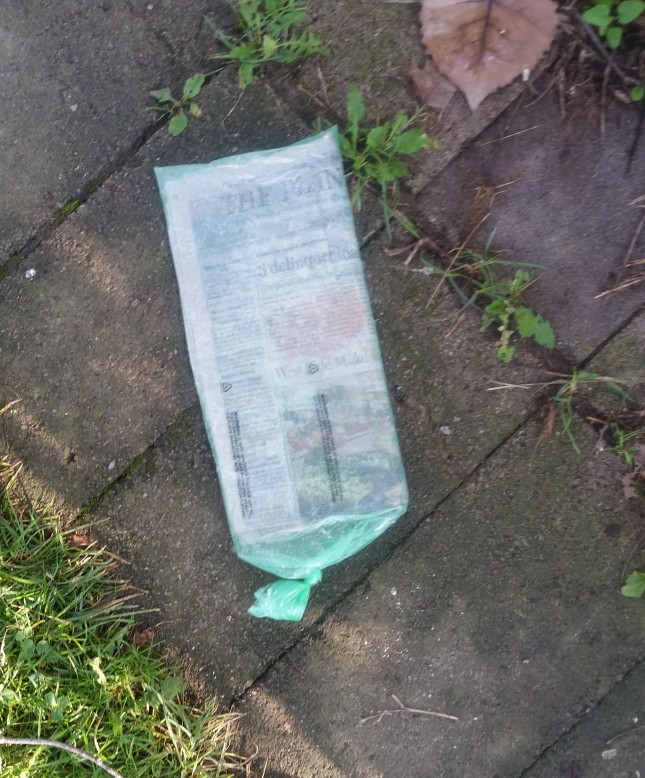 With all of the crazy weather lately, the flooding of Parma yet again, and the fact that for the past few weekends I have been subbing some Plain Dealer routes, it has reminded me of some of the letters that I used to write to my customers. For those of you who don’t know, I started delivering newspapers back when my son was 3 months old, and I continued with it until April of 2016. In those 18+ years, I have seen it all. I’ve seen swimming pools fly, police chases, been almost impaled by surprised bucks, been chased and threatened by drunks, harassed by teenagers with nothing to do, and I was once even chased by a naked man in North Ridgeville, who was either mentally unstable or on some serious shit! I remember I had a hard time getting my car in gear because even though I was scared at the time, it was also quite humorous. Anywho, I have saved some of my favorites, and will post them here for you to enjoy from time to time.  (With that said, I was more than accommodating to the disabled and the elderly at all times, and did my best to make it as easy as possible for them to get to their papers, BUT, I do not take well to threats, or entitlements, or down-right liars.) The following is a letter I received in February of 2016, followed by my reply.

Final outcome: Dick is still a customer, and lucky for him, I’m subbing that route NEXT>>>>LOL